In 2015 Robert Irving, marine environmental consultant with Sea-Scope, had been asked by Ed and Julie Christian to take an Exmoor Flag with him to Pitcairn Island in the South Pacific (nearly 9,000 miles away) and present it to the islanders, many of whom bear the surname Christian, being descendants of the infamous Fletcher Christian of ‘Mutiny on the Bounty’ fame.  Robert presented the Exmoor Flag as a gift to the Mayor of Pitcairn Shawn Christian at the start of a public presentation Robert and his colleague Prof Terry Dawson of Dundee University were giving to the island’s small community.

Robert in turn was presented with a Pitcairn flag by the Mayor and asked to take it back to his friends on Exmoor, which was very warmly received by the Christian family back here in the UK.  The Exmoor and Pitcairn flags proudly fly side by side in this union from across the globe.

The much anticipated Exmoor Flag was unveiled during a historic ceremony at the West Somerset Railway Station in Minehead on the 29th October 2014. The new Exmoor Flag rumbled down the track blazoned on steam locomotive 88 to much fanfare and flag waving.

The flag represents and celebrates the greater area of Exmoor, beyond the national park boundaries.  It is for everyone who loves living in and visiting this most uniquely beautiful corner of England.

Jenny, who lives in London with her young family, first fell in love with Exmoor as a child on a school trip and the whole family has a passion for flags so it was an opportunity she couldn’t miss.  Her bold and simple design clearly struck a chord with the public as it received 41% of the vote. 858 members of the public voted for their favourite flag design, with 446 votes cast online and 412 received in the post.

Jenny’s flag design was one of 5 finalists’ chosen by a panel which included Philip Tibbetts, Community Vexillologist at The Flag Institute, who expertly guided the judges through the shortlisting process.  261 designs were received from all over the world as far away as Australia and America, from community groups and schools to individuals as young as 2 and as old at 93.

Philip Tibbetts commented “It is very pleasing to see how the competition has been heartily backed by the community across the region. Through the dedication of the organisers to get the best quality designs, the corporate supporters that have given the flag a joyous launch today, to the multitude of people who had the enthusiasm and creativity to think up designs – which lead to a strong set of finalists and of course a strong registered flag. Exmoor can now represent its pride in the unique local culture and environment which in turn is part of the patchwork that makes up our national identity”.

The Exmoor Flag has formally been registered by The Flag Institute as an official United Kingdom flag www.flaginstitute.org/wp/flags/exmoor/

As well as the honour of going down in history as being the designer of Exmoor’s new flag, Johnny Kingdom the wildlife photographer, presented Jenny with the amazing prize of the very first Exmoor Flag, hand made in Exford by Robin Ashburner ex-President of the Flag Institute.  In addition Jenny received a beautiful wicker hamper especially made by Paul Tuck of Exmoor Baskets & Hurdles, overflowing with Exmoor produce, products and vouchers for shops, visitor attractions and restaurants, along with a day out with an Exmoor National Park Ranger and a year’s subscription to the Exmoor Magazine.  The prizes were all kindly donated by local businesses keen to support and embrace Exmoor’s new flag. www.exmoorflag.co.uk/competition-prizes/

And in recognition of their huge achievement of being selected from hundreds of entries, the 5 finalists were presented with a book of ‘British Flags & Emblems’, a case of Golden Ale donated by Exmoor Ales and their very own flag design beautifully reproduced by James Guscott of Active Signs (who has a love of flags having been a runner up in the Somerset flag competition last year).

Johnny Kingdom also presented the Rural Deanery of Exmoor and 5 local Mayors, resplendent in their ceremonial regalia, with an Exmoor Flag for them to fly back in their own towns. Pictured: Sara Evans and Russell Perkins on behalf of Rev Stephen Stuckes, Rural Dean of Exmoor. Mayor of South Molton Cllr Stephen Lock and his wife; Mayor of Watchet Cllr Loretta Whetlor; Mayor of Ilfracombe George Squires and his wife; Deputy Mayor of Barnstaple Cllr Mrs Julie Hunt and Mayor of Minehead Cllr Les Smith. 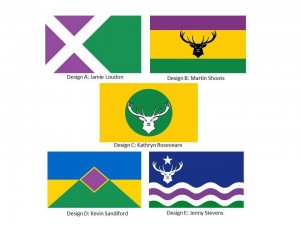 The latest news on the Exmoor Flag design competition – Newsletter No2 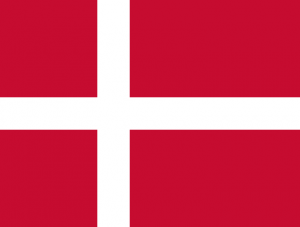 Denmark’s flag is the oldest flag design still in use, as it was designed in the 13th century. The Scandinavian countries all have crosses of different colours on their flags, representing Christianity.

The competition to design the official flag for Exmoor launches today Monday the 16th of June.

Exmoor Flag Project team member Edward Christian was interviewed by Jonathan Ray on BBC Radio Somerset’s Drive Time.  Jonathan Ray says the flag design competition is “something to engage with” and “get doodling”.