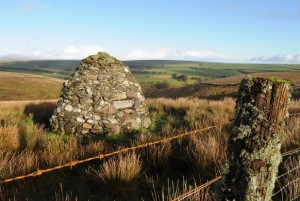 CREATIVE minds are to be given the chance to become part of North Devon history by designing the first ever official flag for Exmoor.

A competition will be launched on Monday to find the eye-catching design which will be used to represent the area – encompassing the national park and surrounding communities.

The project has been organised to celebrate 60 years since the national park was founded, and will see the park become the first in the country to have its own flag.

The first round of judging will be conducted by a panel made up from local residents, members of the Flag Institute and the Exmoor Flag Project team.

A shortlist of 4 designs will be put forward to a public vote and the winner will be announced in October.

Entry forms along with hints and design guidelines will be available at www.exmoorflag.co.uk.

HISTORY will be made in the coming months when a talented local resident helps Exmoor become the country’s first national park with its own dedicated flag. Brushford friends Edward and Julie Christian and Tony and Ceri Keene are launching a competition to find an instantly-recognisable design to become the official Exmoor Flag.

The flag will be registered with the Flag Institute and will become an official symbol of the park. And anyone of any age and any artistic ability is in with the chance of creating the emblem. The West Somerset Free Press has teamed with the couples and will be printing full details of how people can enter the free competition next week, together with an entry form. The Exmoor Flag Project also has the full support of key local organisations including Exmoor National Park Authority and the Exmoor Society.

The project team said: “2014 is the 60th anniversary of the foundation of Exmoor National Park, so the timing is perfect for all those who live, work, visit and love Exmoor to express their pride in all that they think is great about this beautiful corner of the country. “Inspiration for the flag design can be drawn from Exmoor’s unique landscape, its windswept moors, ancient woods, valleys, farmland and coast or its indigenous wildlife. “The winning design will be chosen by public vote and registered with The Flag Institute, the organisation responsible for maintaining the national registry of United Kingdom flags.” The group said the idea had already received an enthusiastic response and they were looking forward to a bumper crop of entries: “Young and old, amateur and professional, individually or as a group – all will be judged impartially and purely on merit, irrespective of artistic ability. “School children will have exactly the same chance as experienced designers.” Entry forms along with hints and design guidelines will be available on the Exmoor Flag website – www.exmoorflag.co.uk – and available in Exmoor National Park Centres and tourist information centres across North Devon and West Somerset.

The first round of judging will be conducted by a panel made up from a cross section of Exmoor people, the Flag Institute and the Exmoor Flag Project team. The panel will compile a shortlist of four designs which will be put forward to a public vote and the winner will be announced in October. As well as receiving a prize unique to Exmoor, the winner will also be presented with the first copy of the flag and have the honour of their creation being registered as the official flag for Exmoor. There will be no copyright restrictions on the chosen flag design, which will be free for anyone to use. “We believe that the Exmoor flag should be generated by Exmoor-loving people for the good of Exmoor to express pride in the community, celebrate heritage and culture of this corner of the country and raise recognition and awareness of Exmoor nationwide,” the team said. The project is being financially supported by both team members and the Exmoor National Park Partnership Fund. A spokesman for Exmoor National Park Authority said that while the authority already had its own distinct logo, it was not freely available for anyone to use. However, the Exmoor brand was already widely used among the tourism and outdoor activity sectors and while Somerset had its own flag and the authority had its own logo, Exmoor as a whole did not. “There are many precedents to this triple approach with many communities, counties and even countries having a distinct flag, corporate identify and tourism brand,” said the spokesman. “The national park authority has provided a small grant towards the costs of the project which will help achieve one of the national park’s statutory purposes – to promote public understanding of the special qualities of the national park by encouraging people to consider what the special qualities of Exmoor are, and how they can be symbolised.”

Don’t miss next week’s Free Press for more details and an entry form. Information and application forms are also available on the official project website www.exmoorflag.co.uk, and the team also has Facebook and Twitter accounts and can be emailed at info@ exmoorflag.co.uk.  In the interim, some top tips for successful flag-designing include:

All content © of West Somerset Free Press unless stated otherwise.

Thank you @everyexmoor for your coverage of the Exmoor Flag Project. Details coming soon re design competition. http://t.co/UHDgXbXXrX